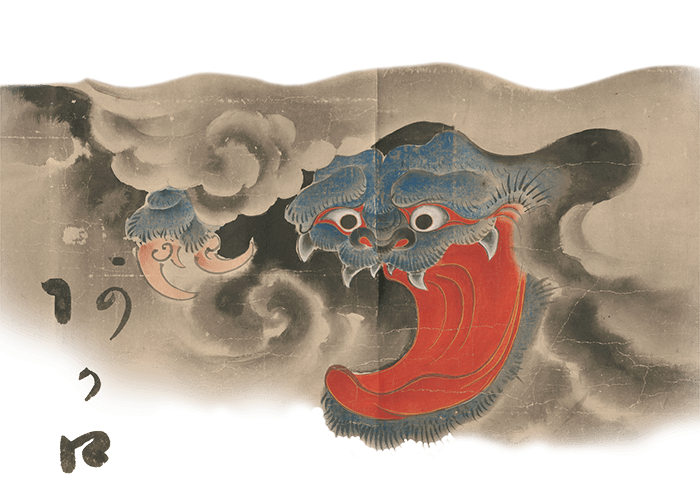 Akaguchi (あか口) is a yōkai from the northwestern region of Aomori prefecture. This yōkai resides in an amorphous black cloud, baring visibly its komainu (Japanese lion-dog) face and large claws. Its face and claws are covered in thick blue hair. It is distinguished by its large red mouth and tongue. Akaguchi is portrayed above a floodgate due to its association with the use of water in a farming country. Though some sources say akaguchi is simply an omen of bad luck, others represent akaguchi as a protective spirit. During droughts, some would siphon above the allotted amount of water for their personal fields, which was a crime that could cost neighboring farmers their livelihood. The perpetrators of this crime not punished by law would be punished by akaguchi. Akaguchi would appear and eat them alive. Akaguchi is more commonly known by the name akashita. This alternate name uses the characters meaning “red tongue” 赤舌 instead of “red mouth” 赤口 and parallels the name of the god Shakuzetsujin 赤舌神 found within a traditional Japanese esoteric cosmology called Onmyōdō 陰陽道 (The Way of Yin and Yang). –Roman Curiel