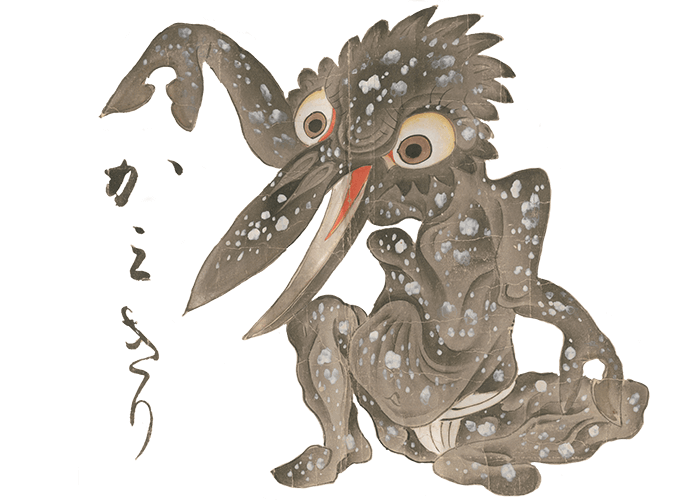 Kamikiri (かみきり) are yōkai that have insect-like characteristics with scissor-like hands and a long beak. They are known for using their scissor-like hands to cut an unsuspecting victim’s hair without warning or motive. Not much is actually known about kamikiri because there has not been a single documented eyewitness account, which might be partially due to the fact that some victims of kamikiri attacks do not realize their hair has been cut until much later. Kamikiri are often depicted in scrolls with a sumo wrestler-type mawashi girded about its loins as it cuts a lock of hair, though the kamikiri in Bakemono no e seems to be cutting a line of silk from the last creature in the scroll, the great spider tsuchigumo. Kamikiri tend to target young women more so than men, though they have been known to attack men as well. They are especially prone to attack at twilight and in urban areas in places such as dark alleys, bedrooms and, most commonly, bathrooms. Hair in the Edo period of Japan was a symbol of wealth and status, while cutting one’s hair was symbolic of becoming a monk or nun, so to have one’s hair cut against one’s will would have been an extremely unfortunate and terrifying ordeal. –Trey Novak