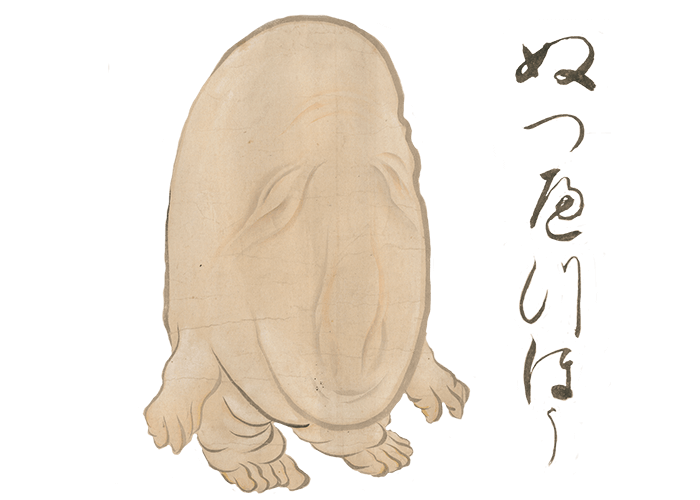 Nuppeppō (ぬつへつほう) is a yōkai in Japanese folklore. Its name is derived from the Japanese word nupperi, which means “flat-faced” or “dazed expression.” It is a large, fleshy blob with saggy lumps taking on the form of arms, legs and fatty wrinkles that resemble eyes, a nose, and a mouth. In addition to looking like a lump of meat, nuppeppō also has a pungent odor and smells like rotting corpses. It usually stays in dark, secluded areas such as mountain ridges, abandoned temples, unpopular streets and alleys, and footpaths between rice paddies. It seems to enjoy seeing humans’ shocked and surprised expressions. Maki Bokusen 牧墨僊 (1775–1824) records in volume 3 of his 1810 text Hitoyo-hanashi 一宵話 a 1609 incident in which something like a nuppeppō was sighted in the shogun Tokugawa Ieyasu’s 徳川家康 (1543-1616) gardens. Ieyasu was so repulsed by the creature that he ordered it taken away, and it was cast out to the mountains. Afterward, he learned that he had missed out, as eating its flesh was said to give unusual strength. –Kristi Bresciano