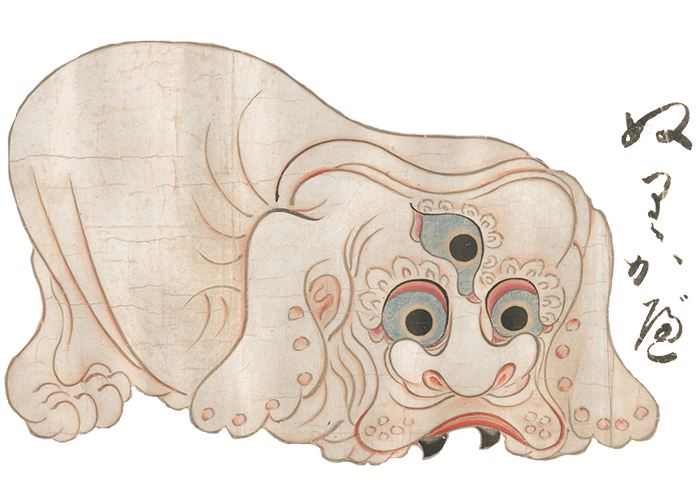 Nurikabe (ぬりかべ) is a Japanese yōkai. It is an inexplicable phenomenon that impedes a traveler’s progress as if it were an invisible wall. Nurikabe means “painted wall” or “plastered wall.” Until Japanese scholars were introduced to the Bakemono no e scroll in 2007, it was thought that nurikabe had not been illustrated before the modern era. Folklorist Yanagita Kunio had recorded oral traditions concerning nurikabe in Fukuoka prefecture on the island of Kyushu and published his findings in 1933. Mizuki Shigeru based his illustration of nurikabe in his famous manga series GeGeGe no Kitarō on Yanagita’s description, and was surprised and pleased when he found out that nurikabe had indeed been illustrated in the Edo period. Some Japanese scholars, however, contend that the nurikabe illustrated in Bakemono no e and the nurikabe of folklore in Kyushu are not the same. The nurikabe in Bakemono no e resembles a white elephant without a trunk, or perhaps a white lion-dog, or komainu, with three eyes and black fangs. –Jack Stoneman