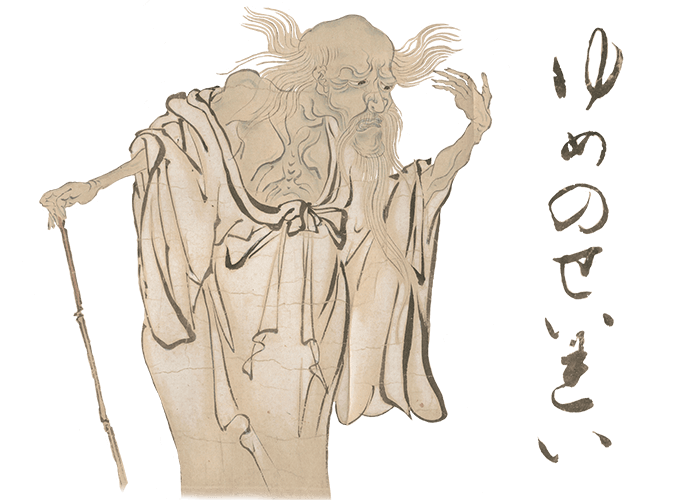 Yume no seirei (ゆめのせいれい) or “dream spirit,” is a mysterious yōkai believed to cause nightmares. Belief in the supernatural was particularly strong during the Heian and Edo periods. During this time, many believed that the spirits of the dead caused a multitude of evils for the living. On certain nights, demons and ghosts would move in a haunting procession from dusk to dawn, known as the hyakki yagyō, or night procession of one hundred demons. Occasionally, yume no seirei appears in this procession. He appears in the Hyakkai zukan (Illustrated volume of a hundred demons) created by Sawaki Sūshi in 1737. Artists depict yume no seirei as an emaciated, elderly man. He wears a loose white robe, which reveals his frail body and exposed ribcage. His thin wispy hair flows behind him in a ghostly motion. In his right hand he holds a cane and with his left he reaches out, beckoning. The bottom half of his body eerily fades away as if he is disappearing. His appearance is similar to the description of female ghosts (yūrei). –Lindsay Boyden