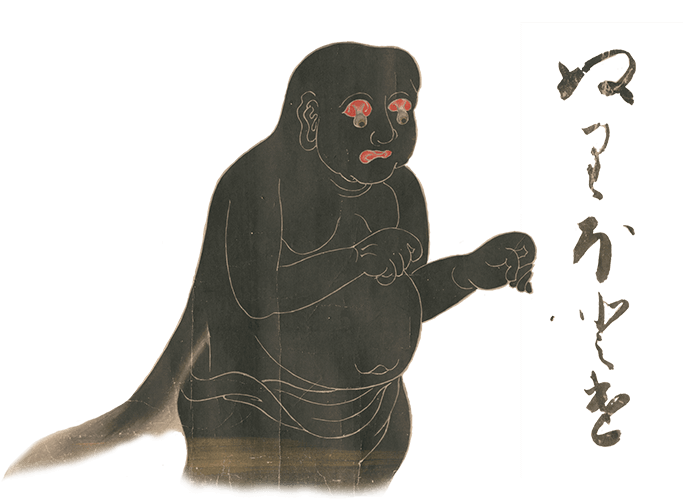 Nuribotoke (ぬりほとけ) is a yōkai that resembles an animated corpse. Distinguishing attributes in most depictions are its pitch black color and its droopy, dangling eyeballs. Its name means “lacquered Buddha,” although the term for buddha (hotoke) can also be used for people who have died, since it is believed that they, too, become a buddha. This yōkai is commonly said to appear at night out of a butsudan (Buddhist shrine) that has been left open overnight or otherwise poorly maintained. In such cases, it has been shown to crawl out of the butsudan in order to cause havoc. Some reports say that when it appears, it is simply to repair and maintain the butsudan itself; however, more mischievous and violent acts have also been seen. One interesting aspect of the nuribotoke’s appearance is the black appendage that can be seen coming from its back, which is widely debated. Many depictions, including this scroll, show it to be hair. Many of these portrayals are from the Edo period. However, there are also many records showing this yōkai to actually have a catfish-like tail coming from its back. –Jordan Casper