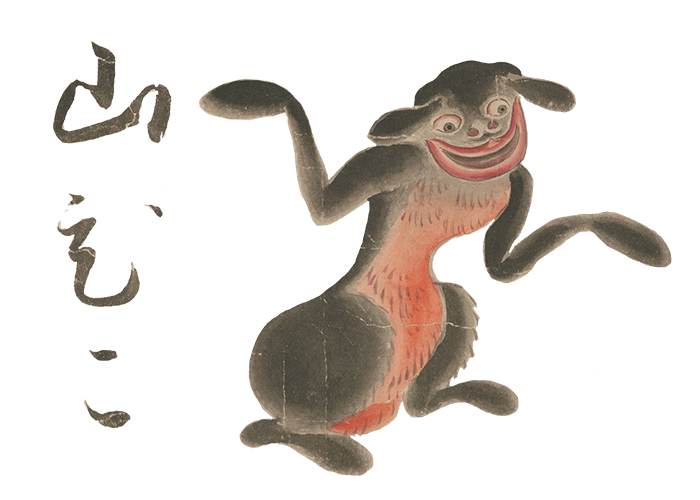 Yamabiko (山ひこ) is a yōkai in Japanese folklore that can be found in mountainous terrain. When echoes appear to be coming from a mysterious origin or come back sounding different, this is attributed to a yamabiko. Directly translated, “yamabiko” means “echo.” However, the kanji characters translate closer to “spirit of the valley reverberation.” Commonly it is written with the characters for “mountain” and “boy,” referring to both the habitat of the yamabiko and its smaller stature. It is a relatively harmless yōkai, causing confusion rather than any serious injury. On the rare occasion when they are seen and not just heard, they appear as a hybrid between a dog and monkey. Living deep in the mountains, direct encounters with the yamabiko are rare. This small and elusive yōkai was not officially classified until the Edo period in Japan. Instead, the bizarre noises coming from the mountain were attributed to natural phenomena such as birds and not given any spiritual significance. Artists often depict the yamabiko in this same pose, with arms out to the side as if it is shrugging. Typically, it is shown crouching on top of a mountain, showing where the yōkai can be found in the wild. The depiction on this scroll differs from typical illustrations in that regard. It is usually shown with gray fur, a peach-colored belly, floppy ears, a large grin, and arms outstretched. –Addison Ritchie